That’s a line that’s at the core of Doctor Strange and is a touchstone for the excellence of the next Marvel Studios film to drop to Blu-ray and DVD. After about 90 minutes of a wild ride of drama, quasi-mysticism and strange origin melodrama, this delightful film takes a psychedelic turn at the same time it fully displays the moving story arc of its lead character. Director Scott Derrickson takes viewers to inner space, to a dimension far behind our mystic ken, in which a lone man is forced to confront a baddie so mystically bizarre that he doesn’t even  have a body.

Our hero, played by the redoubtable Benedict Cumberbatch, doesn’t shrink from the threat. He doesn’t shake with fear or second guess himself. He knows with absolute certainty that what he does is right. He will bear any torture, literally die a thousand deaths, to fight for what is good and important and necessary to save the universe. He is a hero in the truest sense, a man who has transcended his early traumas, truly grown as a person through some terrible events, and he conjures a level of inner courage few of us could imagine.

He is a true hero, in the classical Marvel Comics sense.

And in that, Stephen Strange sets himself apart as perhaps the truest hero of the Marvel Cinematic Universe.

Stephen Strange is perhaps the most boldly heroic of the Marvel film superheroes. Where Tony Stark is morally compromised by his military contracts and Captain America the living embodiment of a military that both freed Europe and committed horrific massacres, Stephen Strange is his own man. He is uncompromised. He has a powerful character arc that illuminates the depth of his personality and the true measure of him as a man. He is thus authentic to the original comics and to the brilliant first artist who drew his adventures.

Doctor Strange has always been a unique character within the Marvel Universe.  He was nominally created by Stan Lee and Steve Ditko, but that was a partnership in name only. Really Lee was more of a friendly companion than an actual creator. The driving force behind the brilliantly intense and psychedelic ‘60s version of the Master of the Mystical Arts was the enigmatic Ditko, a quiet man who has never granted interviews. 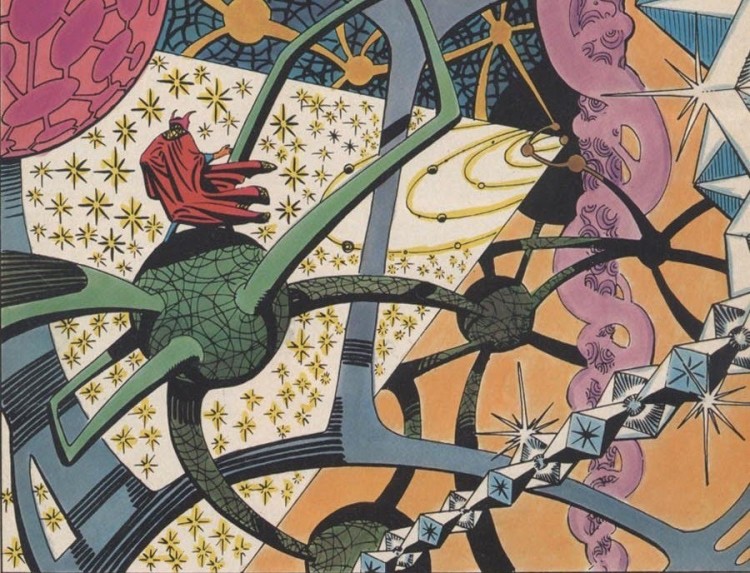 Ditko drove long, absorbing storylines which presented our hero living in the shadows glimpsed out of the corner of our eyes. The lone hero fought incredible evil in dimensions most of us can scarcely imagine. Ditko’s Stephen Strange engaged desperate wars against unbeatable foes, using methods most of us could scarcely imagine. Dr. Strange lived all his heroic adventures in secret. He received no accolades, no adulation or even recognition. (He did get a beautiful girlfriend in his disciple Clea, though future creators developed that relationship more than Ditko did). Strange seldom crossed over with the more mainstream Marvel characters, and they scarcely knew how to deal with Strange when they met him.

The secret battles were one of the keys to Ditko’s Doctor Strange. Equally important was Strange’s origin, because it touched on a key aspect of the hero’s character. In both the movie and comic, Strange’s love of mysticism was founded in failure. As both film and comic begin, Stephen Strange is a world-renowned neurosurgeon, intensely arrogant and intensely great at his vocation. But a tragic accident robs Strange of his ability to use his hands with the kind of precision needed to perform his job. He gives in to despair, tries everything possible to gain his hands back, and finally uses that anger and despair to find a new refuge, in the mystic arts.

It’s a powerful character arc because readers and viewers can easily relate to it. All of us have seen dreams collapse, hopes crash on the hardened world of reality. In both movie and comic we feel Strange is proceeding through the phases of mourning, and when he learns his mystic arts he is finally at the acceptance phase. More than that, in fact: Strange learns his true calling was never medicine. The car accident that scars his hands is a favor. The Doctor can find his true bliss, his ultimate happiness, through gaining his powers.

An event that might have been rooted in tragedy ends up being a great favor.

It’s precisely that realization, that sense of self-actualization, that triggers the amazing moment I mention at the beginning of my essay. It’s what renders this movie, which could have been one of those Inception type mindfucks of a film, into a crowd-pleasing thriller. That scene gives Doctor Strange a heart and power to it that separates it from the Marvel pack. We expect the astonishing special effects and clockwork plot. But Cumberbatch truly inhabits his character and gives Strange a strong sense of life. Tilda Swinton as his teacher The Ancient One provides a mythical, mystical presence that haunts every scene that includes her.

This is a special film. I think it’s the finest and most personal feeling Marvel Studios film since the first Downey Iron Man in its character arc and feeling of walking new ground. It’s got true heroism, great special effects and some delightful performances.

The highlight of this blu-ray is director Derrickson’s commentary track. Recorded the day before the movie premiere, the track shows a perception of the movie founded outside its critical or box office reaction. We learn of Derrickson’s attention to detail, learn how he got the gig (which is emblematic of both his attention to detail and love of the original material). The track is also thoughtful, dwelling at wonderful length on the philosophy behind many of the movie’s strongest elements. This is one of those commentary tracks that added to my understanding of this complex film with more than just thoughts on how complex the movie was to make.

We also get deleted scenes, including one tantalizing moment in which Strange meets Dr. Voodoo, as well as a gag reel, some very slick behind-the-scenes documentaries, a look at future Marvel Cinematic Universe films that frankly bored me, and a handful of other bonuses.

Helpful as the bonus scenes are, though, I think I’ll be going back to rewatch this movie. I’m fascinated by Cumberbatch as Strange, by the smart story arc, and by all the Easter eggs that seem to lurk around every corner. In the end, the magic of this terrific film isn’t all the spells Cumberbatch delivers. The true magic is in the growth Stephen Strange demonstrates.

Today at http://psychodrivein.com The Boys Season

SheBug - 8/23/2020
The Searchers: A Quaint and Polite Film about Racism, Rape, and Remorse
Did you actually watch this movie? We see Ethan tell Martin one of the scalps Scar has, with "wavy"...

Dignan - 7/25/2020
Lost in Translation 348: Films to Remake
I've been looking forward to a long-rumored remake of Forbidden Planet, though admittedly it was...