Opening this article by writing “Moon Patrol is a collage artist” is like saying “Steven Spielberg is a director” or “Stephen King is a writer.” It’s far from enough. Matt Cunningham’s alter ego Moon Patrol milks the most out of the concept of collage art by repurposing old art from movie posters, book covers, paintings, comic books, ads and much more. He makes collage art an art form all its own.

His two most interesting series are The Old Masquerade and Hypothetical Movies, but beware, the following links here do not show all of the work from each series. His Old Masquerade series splits a face into three horizonal segments to show the monster underneath, though sometimes Moon Patrol does just the opposite by showing the human underneath the monster.

The Old Masquerade I reveals clowns, monsters, animals, and a boy underneath other characters. No description is worthy of the lengths which some of his work goes, the birdhouse-mouth-guy-with-dripping-flesh for one or the slimehead-boy (my titles, his do not always have any) in The Old Masquerade II. That second series also reveals the faces underneath other characters to be vampires, werewolves, and some kind of Carpenter/Thing looking thing.

If you’re a lover of fake movies, and you’ve thoroughly browsed the fake movie site Nestflix and feel like it wasn’t quite thorough enough then check out Moon Patrol’s Hypothetical Movies, and don’t forget these links don’t show all the work in the series. These hypothetical movies apparently have no titles like most of his work, but movie lovers will recognize bits and pieces from their favorite movie posters. They’re all in classic movie poster style with a large central figure with smaller images surrounding it. One shows a 1970s era man with nunchaka. Around him are a screaming woman, souls burning in fire, a shadowy wolf, an ape man or perhaps it’s the Phantom of the opera, a nude cheetah-headed woman in a swan dive and a man in a long black coat who looks suspiciously like Barnabas Collins. Another work centers on a tiger-headed man in a fighting pose with hands of fire surrounded by a preacher, a vampire, a plume of smoke belching forth pterodactyls and what surely must be Christina Lindberg’s One-Eye character from They Call her One Eye/Thriller: A Cruel Picture (1970).

Don’t stop at these series though. Moon Patrol’s output is phenomenal, and these merely touch the surface. His Instagram account is a rabbit hole worthy of the fall, or did you already click on that link and come back? Fans can even see how he makes his collages and where he finds the images by clicking on the “Process” links just under his Instagram account. Some of his Hypothetical Movies can be seen in his “Soundtracks” button, another option in the same menu with his “Processes”. If you can find it, hunt down or look out for a new printing of his currently-out-of-print book “The Art of Moon Patrol,” or consider picking up a print or two at his website! 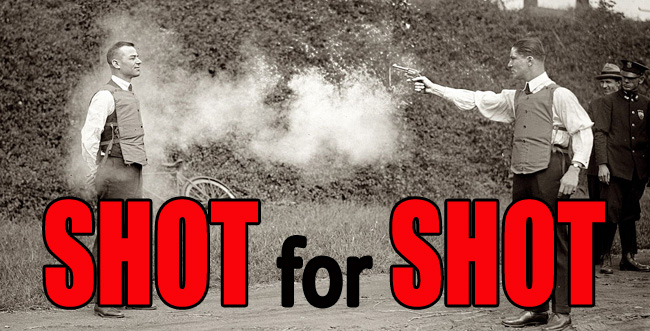