Humanoids from the Deep is one of those titles you’ve likely heard of but never actually watched. They ran it once on MST3K (I’m pretty sure) and it usually comes up in listicles and articles talking about some of the worst or most bizarre horror movies ever made. And it earns that reputation as both a terrible movie and a terribly weird movie for its poor performances, hackneyed writing, and mutant fish-man rape murders. I mean, seriously, the entire premise of the movie is about eight foot tall nuclear fish-human mutants coming out of the water to rape and murder everyone in this small town.

You’re probably asking yourself right now, “Who the hell could enjoy that?” It takes all kinds. The characters are terrible, flat caricatures of people acting out a strange drama in a small fishing town. Honestly, I’ve seen soap operas with higher production values and more talent. But the premise behind it, while poorly executed, was relevant to the transitional 1979-1980 period it was released in. A precursor to the more reputable and better known C.H.U.D. in terms of story, a small fishing town is being polluted by nuclear runoff and illegal genetic experimentation that has led to the birth of hideous fish monsters that steadily begin to murder the unsuspecting townsfolk already on the horns of a dilemma as they struggle to keep themselves afloat.

Anyway, the story is a sort of post nuclear Frankenstein tale about men creating monsters and the impact it can have on society and the planet. But you’re not reading Beautiful Creatures because you’re interested in some ecological pontification. You came here for the monsters.

As I’ve already mentioned, the character interaction and the acting behind it leaves a lot to the imagination but the effects and creatures are phenomenal. The creatures themselves are sort of your standard hybrid looking fish-men, a touch of the Creature from the Black Lagoon and some exposed brained alien invaders. They have long, probing arms and are often covered in kelp and seaweed. And, yes, as I mentioned, they like to have sex with the things they kill. It was the late 70s and the exploitation era of film was coming to a close but, as it always has and likely always will, sex sells. So girls in bikinis getting stripped and ravaged after their muscle clad men were torn to shreds satisfied everyone’s primal desires while adding some filler material and monster screen time in lieu of a decently written script.

In all fairness, the creature work was pretty good for low budget, late 70s monster movies with guys dressed in rubber suits. I mean, you can clearly tell they’re just guys in rubber, but the idea behind them is original enough. Watching C.H.U.D. after watching Humanoids from the Deep really does show the similarities. They were only shot about five years apart and while I’ve never heard it said that Humanoids played any role in the much more fan acclaimed and arguably better written and budgeted C.H.U.D. the idea of a corporate or government entity using the unsuspecting populace of America as guinea pigs for nuclear and genetic experimentation was a terrifying notion and, even now, an overwhelmingly plausible reality.

Humanoids from the Deep is not going to be a repeat performer in your video library but it’s definitely worth watching once. The practical effects and costuming make up for some abysmal storytelling and, as a bizarre kind of flick with a seemingly unique gimmick, it’s a definite must watch at least once in your life. I’d say look up the MST3K version because at least Tom and Crow make the dialogue more interesting, but the more puerile readers aren’t going to want to miss the copious amounts of nudity and crimes against nature that the film offers. There might be a Rifftrax version of it out there, I’m not sure. The information I’m finding about that seems a little fishy.

Fine. Enjoy the movie and I promise the next installment of Beautiful Creatures will have fewer puns and maybe a little less fish-man on man violence. 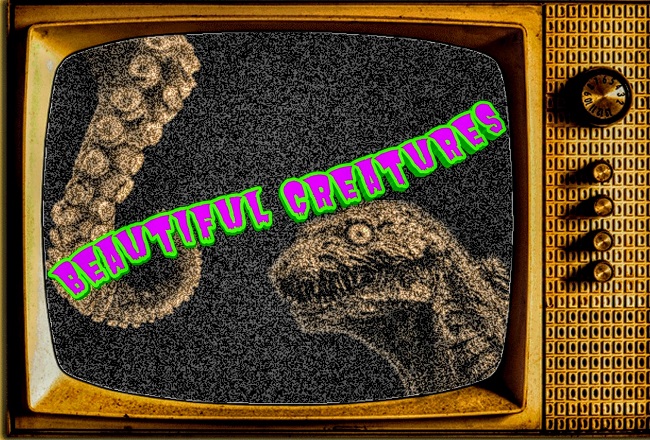