Helldriver is less a “movie,” and more an unbridled ride through the cinematic insanity that is Japanese Splatter Cinema. Much like Tokyo Gore Police, this is another film that you are going to need to strap the fuck in for because this visual roller coaster is an example of unhinged, creative brutality at its finest.

The plot is as crazy as the visuals but I’ll do my best to distill it. When a freak meteor falls from the sky it releases a mysterious black ash that turns millions of Japanese residents into zombies. Now it is up to badass zombie slayer Kika (Yumiko Hara) to save Japan from the epidemic by going after the zombie queen herself….her mother Rikka (Japanese Splatter legend Eihi Shiina)

So, there it is in very broad strokes but that doesn’t even begin to describe the utter madness of this film. Right from the opening scene that sees a physics-defying truck spinning through the air like a toy and Kika pole-dancing on a zombie’s elongated neck (that’s right, you heard me) it is clear this is a film that is not taking itself too seriously. But that’s okay in this case and this kind of glorious madness is exactly what we’ve come to expect (and crave) from the Japanese Splatter subgenre.

The film is clearly on a mission to start out crazy and just get crazier…..and mission fucking accomplished! Zombie babies are swung on umbilical cords like weapons, severed heads fly through the air to devour people, a working car is made entirely out of severed body parts and much, much more! It all culminates in a battle in space so insane that it practically defies description.

The film is also violent. Really, really violent. Torture, cannibalism and endless geysers of blood all play out onscreen in incredibly graphic detail despite the film’s shockingly low budget. Naturally, many of the effects have the sort of low budget aesthetic you’d expect in Japanese Splatter but the sheer creativity on display here more that makes up for it and just add to the campy fun.

And campy fun is really the key here because that is certainly the intention of director/co-writer Yoshihiro Nishimura. There is definitely a very different tone here than the grim torture-porn films like Grotesque and despite all the bloodshed, it never loses its sense of careless fun amid the carnage. For some, it would be easy to dismiss such a film as meaningless visual stimulation but the fact is that it knows exactly what it wants to be sticks with it a hundred percent. The characters are actually very well defined and solid and even with a two hour running time the film never feels drawn out or boring.

So if you think you can handle taking a trip through a world of gruesome, next-level insanity then grab a few beers and hitch a ride with Helldriver, you won’t be sorry you did!

This review originally ran on Corin Totin’s Sick Flix website. Check it out for more dark and disturbing film reviews! 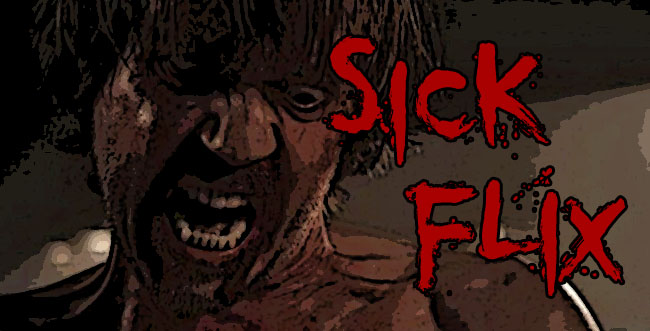