In the 1950s, though, for creature movie stop motion animation specialists like Ray Harryhausen and Willis O’Brien, it was cowboys lassoing dinosaurs, riding Tyrannosaurs like prehistoric broncos, and bulldogging Pterodactyls.

It was a time for Westerns: the myth and the idealized, and, once in awhile, the fantastic.

If you were one of the people who shared Harryhausen’s and O’Brien’s fondness for both prehistoric behemoths and hard-riding heroes, you really only had two films that solidly fit into that category: The Valley of the Gwangi and The Beast of Hollow Mountain.

I don’t believe as a kid I ever knew there were trading cards for The Beast of Hollow Mountain. I suspect I would have had to have had them if I knew.

Scream Factory has released the second-best cowboy-combating-dinosaur movie, The Beast of Hollow Mountain, in 1080p high-definition widescreen in its Blu-ray/DVD combo SF/Horror double feature edition. It has been difficult to find The Beast of Hollow Mountain on any kind of disc, and certainly not in its original framed format or without the color bleached bloodlessly out of it.

This cowboy/dinosaur conflict is a way-distant second to Ray Harryhausen’s The Valley of Gwangi which starred James Franciscus as the cowboy. But you can’t beat the price for two movies that filled outdoor movie screens. 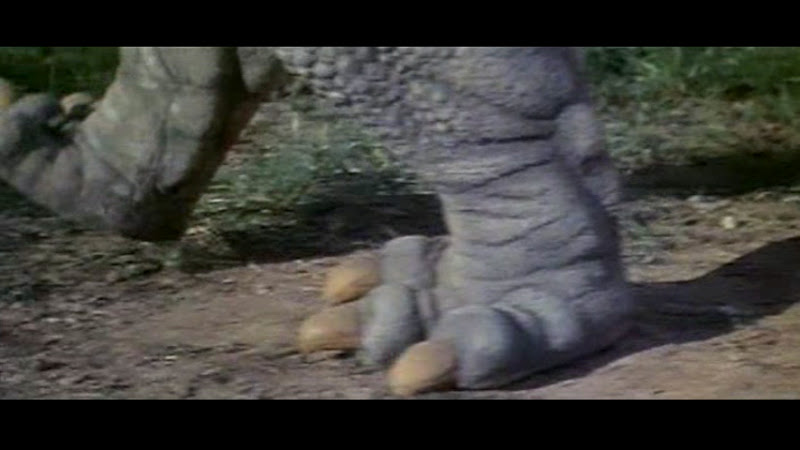 What the hell were they thinking? They should have just ditched this insert of rubberized dinosaur feet. It’s as bad as it looks.

The dinosaur in The Beast of Hollow Mountain is not in Ray Harryhausen’s class, nor is it in the class of Willis O’Brien, who had the initial idea for a dinosaur devouring cattle. But the star of the film is Guy Madison, who was Wild Bill Hickok on TV in the early 1950s, so fans of early television westerns don’t have any kick about the human part.

This dinosaur may be late to the breakfast table (he doesn’t appear until an hour into the film) but he does want to devour more than Sugar Pops — which Madison blasted with his six-gun aimed right into the camera at the opening of many an episode of Wild Bill Hickok. This was in the days when advertisers could have the cowboy heroes pose with their sponsor’s products, whether it was cereal boxes, chewing gum, whatever, while declaring proudly chowing down and endorsing Sugar Pops essential for your health and happiness, or something to that effect.)

One of the outdoor fight sequences with Guy Madison, obviously doing a number of his own stunts. It isn’t one of the great fight sequences of all time, but it helps keep the story moving until the budget can afford the stop motion animated Allosaur.

Madison’s partner the veteran character actor Andy Divine would have made a fine sidekick for Madison in The Beast, but you can’t have a dinosaur scooping Andy up into his mouth and chomping down on him with razored teeth. Everyone would be waiting for Andy to yell, “Hey, Wild Bill! Wait for me!” Or for him to do his not-so-subtle euphemism with his popsicle-stick scraped voice from his kid’s show, “Twang your magic twanger, Froggy!” You do your own interpretation of what that meant.

Seriously. How the hell did they get away with that in the 1950s?

Scream Factory’s print allows the bright colors of the titles to return from the muted tones of the few prints available of the film on VHS. Plus from what I have seen, the framing restores the original aspect ratio of The Beast, which has been lost for ages.

The Beast of Hollow Mountain was the first film to use stop-motion animation and live action in widescreen and in color. Gwangi is vastly superior, but Harryhausen made that film in the 1960s. The Beast made his way to theater screens in 1956. Guy Madison and Andy Divine were still riding hard on TV at the time. (And by the way, for a man his size, Divine could really stay atop a galloping horse. Horses do not gallop that way on film very often. He must have had a very sturdy horse. I don’t want to think about what would have happened if Andy had crashed.)

According to Wikipedia, the basic story idea for The Beast came from Willis O’Brien, who is purportedly credited as El Toro Estrella. Don’t ask me why that is. I haven’t a clue.

Patricia Medina was one of the few actresses to have a return role on Richard Boone’s Have Gun, Will Travel, as the Lady. She has a lot more to do there than she does in The Beast of Hollow Mountain. Curiously, even by mid ’50s cinema standards, Guy and Patricia are never allowed any real passion between each other. Patricia would go on to portray a lesbian in the early ’60s movie The Killing of Sister George.

The Neanderthal Man, which is included in this Blu-ray double feature, is representative of low-budget horror movies of the time. It’s in black and white and has some early-’50s TV stars as monsters or heroes of the film. The film has about five standing wall sets, though some stock footage will tell you we’re in Yosemite.

Like The Beast, there are some early fan favorites in the cast of this movie. Neanderthal starred Robert Shayne, who played Inspector Henderson in the 1950s Superman TV series, and Richard Crane who was Rocky Jones, Space Ranger. Beverly Garland, who played a seductive pirate in more than one episode of Yancy Derringer (also available on DVD from Shout!), is the attractive woman in love with — and engaged to — Shayne.

Shayne plays a typical mad scientist of his time, in the throes of madness, subjecting his maid to experiments that turn her into a creature from the past. He snarls at Garland and Crane. The script doesn’t even allow Shayne the pleasure of getting to hold Beverly; he ignores her right from the get-go, and thus we know he must be mad even before he starts shooting drugs into himself to turn himself into a Neanderthal Man. Robert Shayne has to perform all his histrionics without moving too much because the camera must stay static so it does not move beyond the stage wall.

Still, if you’re a fan of any of these people, you probably won’t care much about the flimsy sets and bizarre designs. 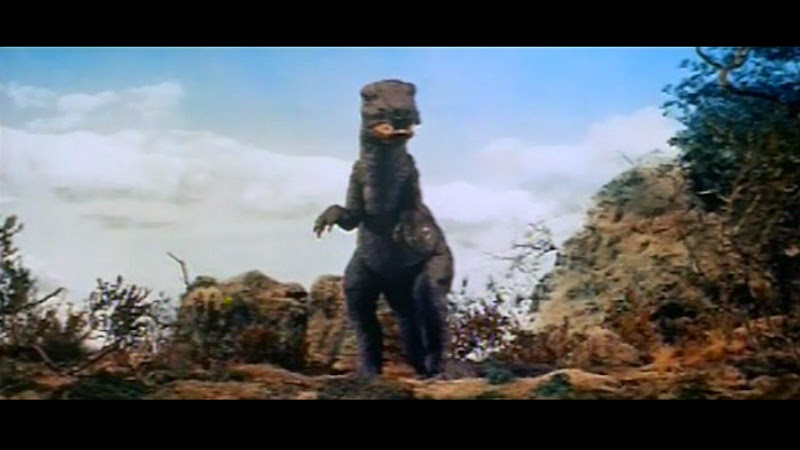 This is what you came to see. Give or take a minute, either way, you finally see this about an hour into the movie.

Shout! Factory is offering this double-bill for less than $20.00. There was a time you’d hardly expect to see these films make the light of day again, and this company makes that idea a happy, distant memory.

Being a Western, being shot on location, and having a somewhat larger budget, The Beast of Hollow Mountain can keep its story moving visually while Neanderthal can’t. There are swamp settings and Mexican haciendas and day-lit graveyards. If things need a little energy, Guy Madison gets to court Patricia Medina, much to the anger of her fiancée. This leads to fistfights around the town.

One of the best dinosaur vs cowboy images in the film.

There is nothing new here, but the characters move about their business until the allosaurus arrives, right around at the one-hour mark. Then the dinosaur kills one of the main characters, scoops him up into this animated mouth, and as Ray Harryhausen often did, both man and dinosaur are animated. With Ray, you probably wouldn’t notice unless someone told you. In this movie, well, you can definitely tell they’re animated.

Then there’s the cattle stampede. It’s not the most effective cattle stampede you’ve ever seen, but Guy Madison gets to ride a horse, and in those days, those actors could do some riding. I can’t say this movie includes an example of Guy’s best hard riding, but it is better than having to act emotionally unstable against a stable set, as Robert Shayne is required to do in his movie.

I told you the Beast of Hollow Mountain devoured more than Sugar Pops. Proof positive.

I still like the finale, with Guy clinging from a vine hanging down over the swamp. On the shoreline the Beast makes hollow roars and jerky animated gestures, wanting to see if Guy tastes as good as Sugar Pops. Okay, I know this is silly. I accept that the allosaurus pursues the cowboys and that he coexists with them. That’s the premise of this movie and I have no choice to accept it if I’m going to watch it. As with comedy, if you buy the premise, you buy the bit. But here’s the thing I never got. In fact, I don’t think I ever got it when I was a kid:

Guy pulls himself out of the quagmire on one of the vines. He’s covered in muck and slop. When he pulls himself up to the height of the Beast’s head he starts swinging toward the Beast. 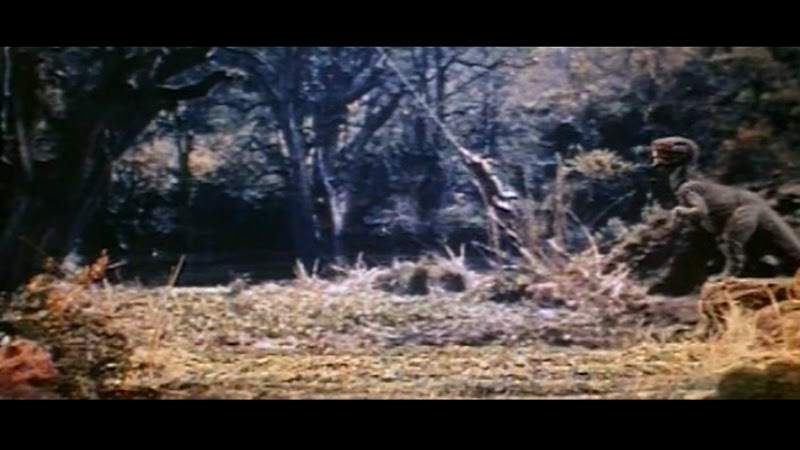 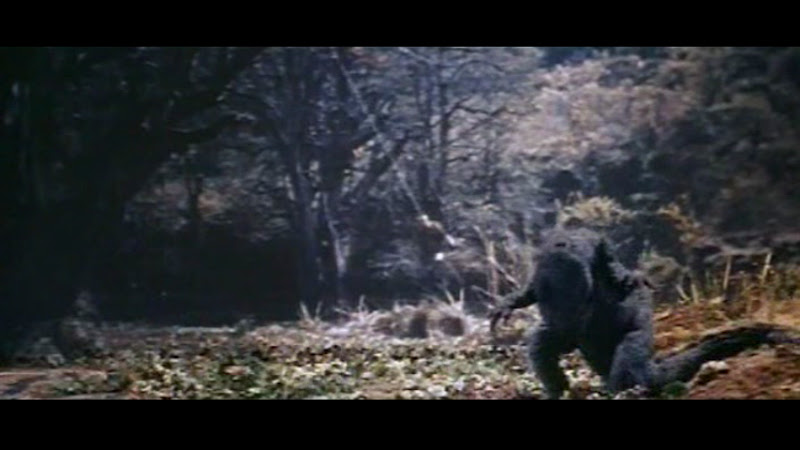 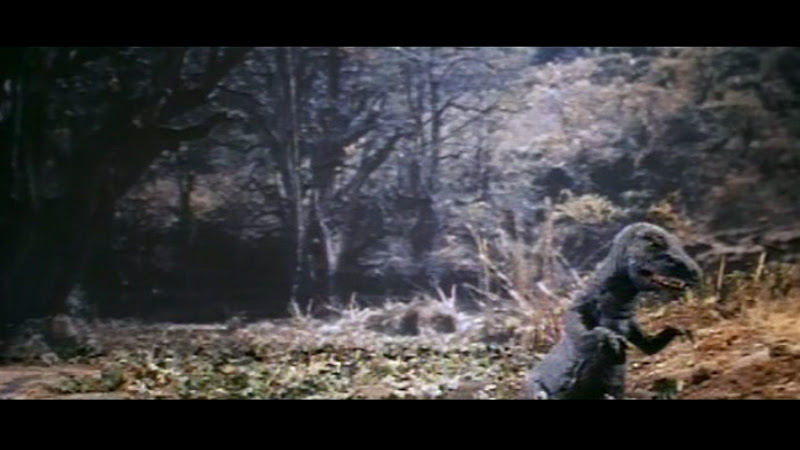 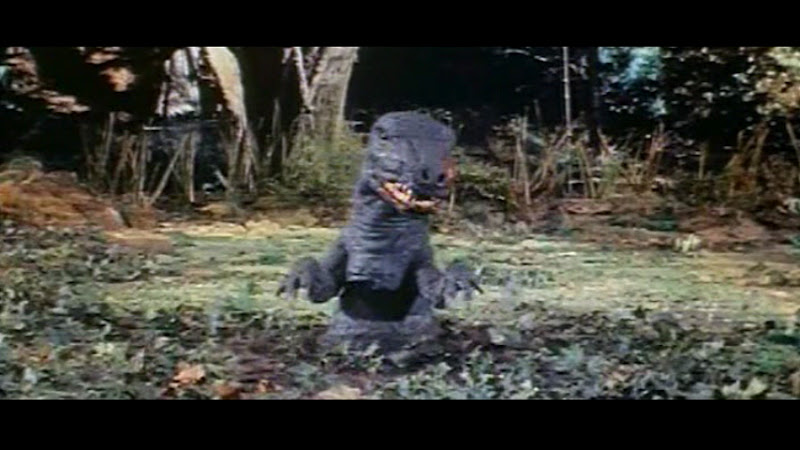 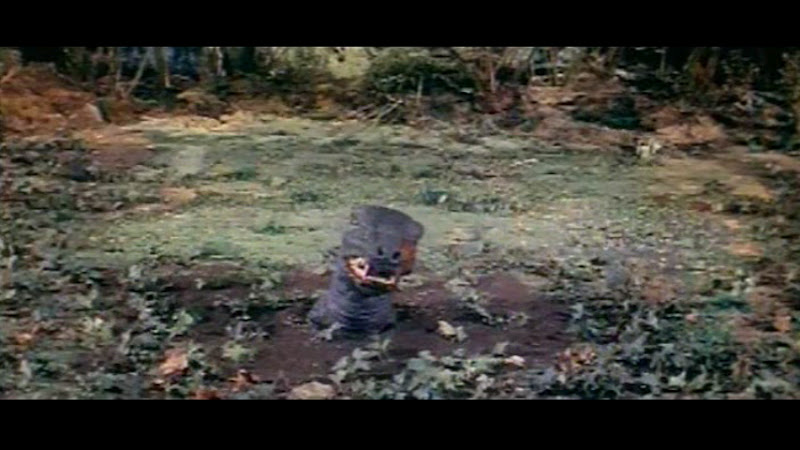 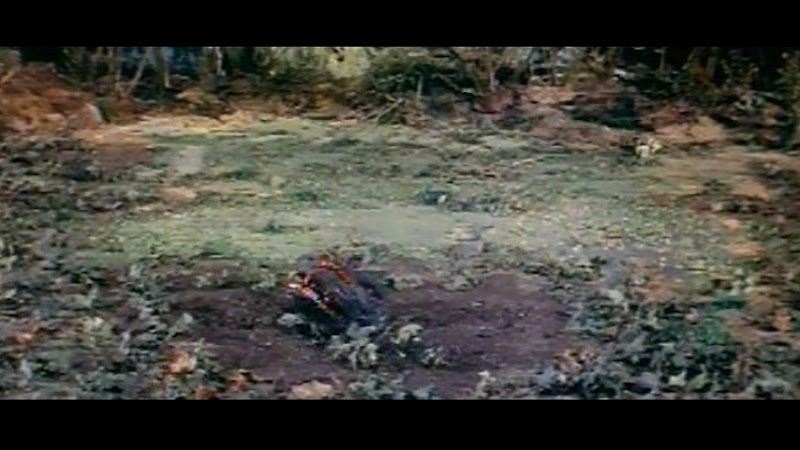 Ah, the impossible swing. But still, I really like that wide shot. And even the POV where the camera swings back and forth over the Beast’s head.

Now, I have accepted dinosaurs exist alongside cowboys. But really, if you’re dangling helplessly on a vine, how the hell do you suddenly start swinging high and wide, going over the dinosaur’s head, while the Beast claws at you? You know how hard it is to get a still vine to start swinging like a trapeze? Maybe you can do it if you’re Burt Lancaster.

But you know what, I still like the cowboy figuring out how to taunt the dinosaur. The swinging shots are my favorite moments in the film. I wish there were more of them. 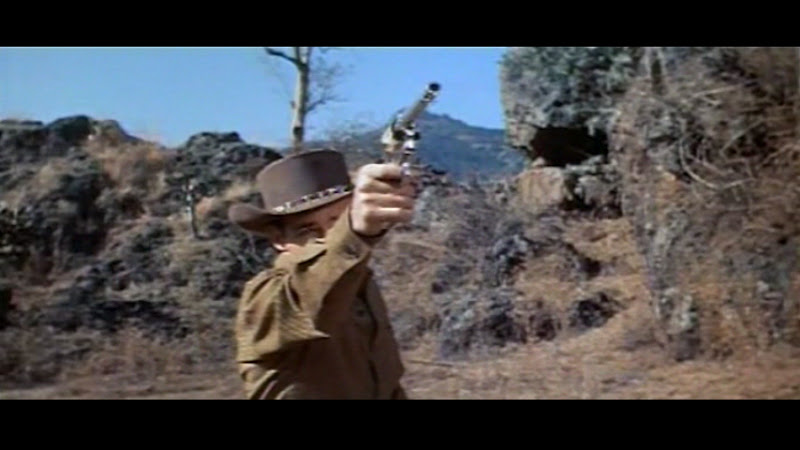 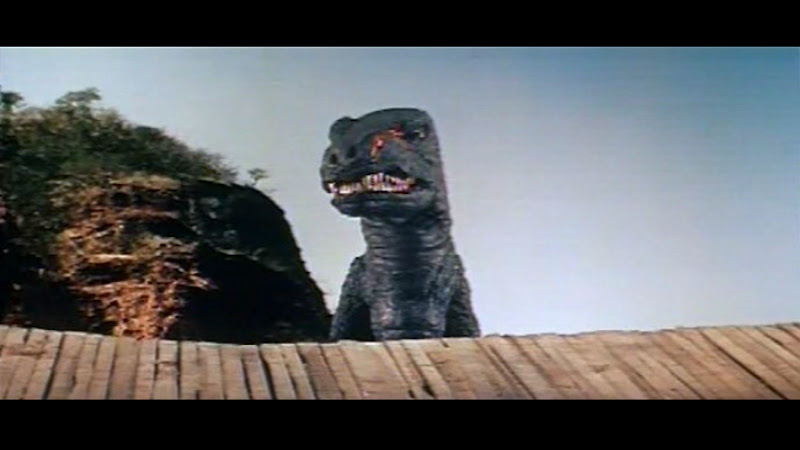 Guy Madison would survive the Beast. Later he would ride in Spaghetti Westerns, sometimes opposite Edd Byrnes from 77 Sunset Strip. They would become spaghetti cowboys in films like Payment in Blood.

Nobody had to ride very hard in a Spaghetti Western.

And there was nary a dinosaur of any type in sight.

I really like it when I can accompany these reviews with a series of stills that give you a real idea of what the storytelling looks like.

The hardcover edition of DETECTIVES INC. is still available. Continued sales on the series can help make the new Detectives Inc.: A Fear of Perverse Photos/a Repercussion of Violent Reprisal a reality. You can order it from  Amazon.

And new things are about to happen at donmcgregor.com.

Torsten Lehman in Germany has a email address where you can reserve a copy of a Limited Print Run of the Zorro newspaper strip with color Sundays. If the company reaches 100 orders you’ll be a part of the select group of collectors!